Last week, this blog made a slight mistake.  It was a common mistake, but still incorrect.  I wrote about quadrigas, the racing chariots that for centuries raced around the Hippodrome in Constantinople.  While the story, itself, was correct, my mistake was obvious.

I put the cart before the horse.

Specifically, the four magnificent bronze horses pulling the quadriga that for centuries was on display at the Hippodrome.  Over the centuries, the chariot has vanished, but the four horses are still struggling—and traveling—on. 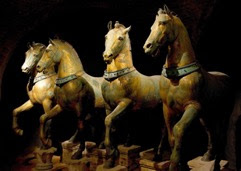 As racehorses, they are anomalies.  Racehorses are normally at their peak as three-year-olds (that being the age of all the horses who run at such events as the Kentucky Derby), but these horses still seem to be in their prime at the age of….well, nobody really knows. They may have been cast as long as 2400 years ago.

According to one source, the statues were created by the great Greek sculptor Lysippus, the personal sculptor to Alexander the Great.  The classical style and attention to the veins and muscles of the lifelike pieces are certainly in his style, but personally, I think the pieces may be a few centuries newer, as there is a small problem with the material the sculptor used to cast his work (but we’ll come back to that).

There is some evidence that the horses made their way to Rome, where they may have been placed on a triumphal arch.  There are several Roman carvings depicting quadrigas on arches driven by the pagan god Nike, though most bronze statues from that period were later melted down to be recast as Christian art.

Whenever they were made, they were definitely meant to be viewed from below.  While various origins have been suggested from all over the world, all I’ll say is that the sculptor definitely wasn’t from Texas.  The statues are breathtakingly beautiful, but they are not really accurate depictions because their proportions are incorrect when viewed close-up.  They are of no identifiable breed and their necks and legs are too thick while their backs are too short.  This is probably because the Greeks were experts at producing art that looks good from a distance or from a certain perspective.

Take, for example, the Parthenon.  The giant structure looks perfect, even though it was actually constructed without a single straight line: since the surface of our eyes is rounded, the Greeks compensated for this by adding slight curves to the building.  A similar technique was used to create these horses so that the perspective would look correct when viewed from below.

Constantine gathered art from all over the old Roman Empire when he moved his capital to Byzantium, renaming it Constantinople.   The emperor placed the horses and chariot on a pedestal above the Hippodrome in the early 4th century, where they oversaw the violent chariot races there for nine centuries.

In 1208, Pope Innocent III launched the Fourth Crusade (the previous three having been colossal failures even by French standards).  The goal of the valiant crusaders was to board ships at Venice, sail to Egypt, disembark and travel overland to Jerusalem, where they intended to reconquer the Holy Land in the name of God.  Unfortunately, due to the rising cost of purchasing ships, they detoured to the Christian town of Constantinople, where they attacked, sacked, looted, and slaughtered—all in the name of several high-interest Venetian loan sharks.

This may not sound like a great accomplishment, but the French wouldn’t have another military victory this decisive until a few centuries later when they turned their army over to a schizophrenic teenage girl.

The Triumphal Quadriga was shipped back to Venice, but to make it easier to load onto ships, the horses' heads were cut off.  Upon their arrival in Venice, the heads were reattached, and the horses were placed on display on the exterior of St. Mark’s Basilica—only now they sported collars to hide the seams.  Somewhere on this trip, the chariot was lost and has never been recovered.

Note.  During the rough trip, one of the horses lost a leg.  Among the massive amount of art stolen were also the Four Tetrarchs, a sculpture of four Roman Emperors.  By a weird coincidence, this piece also lost a leg during shipment.  While both statues were repaired, I have always wondered how much more interesting both pieces could have been if the two legs had been inadvertently swapped.

The horses remained at St. Mark’s for five centuries and show up in countless travelers' accounts or artists' renditions of the basilica.  Petrarch visited the city and wrote about the horses:

“I took a close view of the horses of St. Mark’s. When one looks up at them from below, it is easy to see that they are spotted: in places they exhibit a beautiful yellow-metallic lustre, in others a coppery green has run over them. Viewing them more closely, one sees distinctly that once they were gilt all over; and long streaks are still to be seen over them, as the barbarians did not attempt to file off the gold, but tried to cut it off. That, too, is well: thus the shape at least has been preserved. A glorious team of horses: I should like to hear the opinion of a good judge of horse-flesh. What seemed strange to me was, that, closely viewed, they appear heavy, while from the piazza below they look as light as deer.”

For five centuries, the four horses remained at the basilica, until Napoleon took the city.  Following the long-established custom, he began systematically looting the town, snatching centuries of art work.  When the city fathers suggested that he take the four horses and leave behind some of the Renaissance paintings, Napoleon thanked them for their advice, kept the paintings, and took the horses, too!

Back in Paris, Napoleon had the horses placed atop the Arc de Triomphe du Carrousel, pulling a newly created quadriga driven by a likeness of the emperor himself.  There are two triumphal arches with similar names in Paris, and this is the smaller of the two.  The larger Arc de Triomphe de l'Étoile was finished in 1836, making it the world’s largest triumphal arch until Mexico built the Monumento a la Revolución to commemorate the independence that Mexico “won”, ironically, only because Napoleon had invaded Spain and put his own brother on the throne.  For a while there, Napoleon looked at the assorted countries of Europe and decided he wanted to collect the whole set, placing first one relative then another in charge of his various conquests.

Napoleon evidently didn’t really appreciate the four horses.  At the height of his power, he suddenly decided to have the horses melted down for cannon balls.  Luckily, the smelter declined the job, since after an analysis of the sculpture, it was revealed that the horses were almost pure copper, not actually bronze.  When the pieces were originally cast, they had been gilded in a process that required heated mercury.  Copper has a much higher melting point than bronze (Which I do NOT understand since bronze is about 90% copper and 10% tin.)  Considering the complexity of the gilding process and the difficulty of casting copper, I think it unlikely that Lysippus actually created them.

After Napoleon lost at Waterloo, the Duke of Wellington felt that the stolen artwork (none of which had come from England) should be returned to its rightful owner...Well, most of it.  Roughly half of the art was returned to its countries of origin, a little trickled back to England, and the remainder can still be found in Paris.

In the case of the four horses, the Austrian Emperor sent Captain Dumareq, a veteran of the Waterloo battle, to insure the safe return of the sculpture to Venice.  Strangely, the city that tried to sacrifice the horses to save a few paintings had a celebration upon their return.  The partying must have been intense since it is recorded that the town’s brothels closed for the day.  Back in Paris, copies of the horses replaced the originals on the triumphal arch.  Today, Napoleon is no longer driving the quadriga, but has been replaced by an amorphous male figure who is ironically labeled “Peace”.

War again moved the horses during World War II, when Allied bombing was directed at the Venetian harbor.  Carefully crated, the horses spent the last months of the war securely hidden away in Rome, only to return to Venice after peace was declared.  Finally, just a few years ago, the horses were moved again, this time for protection from acid rain and toxic pollution.  Today, the horses are safely inside the basilica while copies are on display outside, over the loggia of St. Mark’s.

So, the pagan horses of St. Mark, that may have been originally from Greece, traveled to Rome, were then taken to Constantinople, where they were seized by Crusaders (who were supposed to be in Jerusalem), so they could be taken to Venice to decorate a Christian church.  Once in Venice, they stayed there, except for the period when Napoleon moved them to Paris (or the time when World War II sent them to Rome).

It seems to me the least the people of Venice could do is to make a fourth set of copies and send them back to the Hippodrome.