Random Thoughts of a Student, Again

Having retired from teaching at the university, I have now returned as a student, seeking a degree in a field in which I have no experience, little talent, and no expectations that this new degree will ever be even remotely profitable.  I am now a freshman in Art History.

Two thousand and ten years ago, a guy named Virgil said, “Happy is he who can discover the causes of things.”

Going back to school makes me as happy as a tornado in a trailer park! I love the discussions, the excuse to buy and read new books, and the exploration of virgin intellectual territory?  I  just generally like being back in a classroom without the responsibility of being the teacher and while I’m genuinely having fun, there are a few things about being back on campus that stand out and make me wonder.

The following are just a few of the random thoughts I have had during the last two weeks at Enema U:

—Where are all the other retired people?  In almost every class that I taught, there were a sizable number of non-traditional students (that’s educationalese for ‘old farts’).  There seem to be relatively few in my art classes.  Perhaps the people with artistic talent have already taken these courses and those without any talent—like me—are generally smart enough not to try.

—For the zillionth time, I went to the library and discovered that they did not have what is considered to be a standard reference book.  There are whole fields where I own more books than this damn library has.  What the hell are the library people spending the money on?  The library now sports a coffee shop, lots of group study room, and luxurious office spaces, yet it  seems to be canceling subscriptions to journals at a record pace.  Who the hell is running this shit show?

Universities used to brag about their libraries.  At Enema U, they seem to be apologizing for having one.  Periodically, this state has referendums on education, usually for erecting new buildings.  I have a modest referendum proposal that would immediately improve education:

At any educational facility funded by the state, the total budget for playing football cannot exceed half the amount spent on the library.

In the last two weeks at school, I have heard not a single student or faculty member mention football, but several have complained about the library.  By contrast, the Chancellor and Provost—affectionately known as Moose and Squirrel, have sent several emails about athletics and not one about the library.

—I have heard students complaining about a few things besides the cost of tuition.  There is a problem with parking and the cafeteria food is horrible.  In both cases, the university tends to treat the students as a seam of ore that has to be strip-mined.  The company that has been awarded an exclusive right to sell food on campus is best known for its dining facilities at airports and prisons, neither of which is noted for fine dining since they all use the same cookbook, “Fifty Shades of Gruel”.

The students hate the cafeterias, the university responds by requiring freshmen to live on campus.  It doesn’t take a genius to envision that such tactics will further hurt the declining student recruitment.

If you mention the problems of parking to any administrator, I guarantee that the answer will be:  “When I went to the University of Who Gives a Fuck, we had to park in a different county, then walk uphill in the snow to campus,” says the administrator that had actually gone to a small Ivy League college with ample student housing in a town with a subway system.

I have never yet met a university administrator smart enough to realize that you never win an argument about customer satisfaction.  If the majority of students think a situation is a problem, it is.  And students will increasingly go to universities that understand this.

—Students are loud.  If I can hear the music coming out of your earbuds from ten feet away, the obvious hearing loss is the least of your problems—You may have brain damage.

And what the hell is going on with all the women in lace-up combat boots?  Over the last half century, I have broken both ankles and one knee.  I have had six different operations on one leg and spent more than a little time using a cane or crutches.   Yet, somehow, I can still walk down a hallway outside a classroom without sounding like a crippled Clydesdale crossing a wooden bridge. 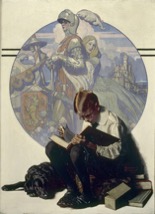 —Don’t you just hate it when you are posting on Facebook and you are suddenly rudely interrupted by a jogger bouncing off your windshield?  Well, this has never actually happened to me, but it must happen frequently on campus.  Several times a day I see someone walking across campus totally unaware of anything around them except their phones.  Naturally, I go and stand in front of them.

There are students who check their phones every five minutes, even during class.  I can’t help but wonder if they do that during sex.

Maybe it is because I am taking art classes, but all morning I have been trying to imagine a Norman Rockwell painting of a slack-jawed youth of today staring into an iPad.  Seems impossible.

—Once again, I am forced to admire the work ethic of adjunct professors who frequently labor like Dickensian orphans.  They work for less than minimum wage, are given no benefits, have absolutely no job security, and are treated by the tenured faculty as if they were lepers on fire.  Yet, despite all that, adjunct professors work harder than ugly strippers.

—Why hasn’t someone sat down with all of the students and objectively discussed the possibility of their majors ever leading to a job?  There are way too many students seeking careers in fields with no possibility of employment.  If you are one of the 40 choral music majors at a state agricultural school, someone should tell you that there was not a single person in that field hired anywhere in this state in the last two years. 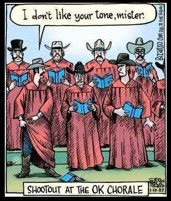 There are far too many people seeking degrees that all but guarantee they will never be employed in their field of study.  Outside of academia, the chances of someone with a degree in Gender Studies getting hired in that field is roughly the same as the chances of an alchemist being hired by Dow Chemical.

Total student debt is now a staggering $1.5 trillion dollars.  And since the student loan business was nationalized by the Obama administration, these debts are carried by the Federal Government, meaning that students cannot default on these loans even through bankruptcy.   With the willing and eager aid of universities, almost any student instantly qualifies for loans that will prove to be impossible to repay.

In the last twenty years, the cost of textbooks has doubled, as did the amount of debts owed by students.  At the same time, universities are cutting the number of classes offered and utilizing low-cost online education that has yet to be proven effective.

If greedy universities help young students receive huge loans to pursue majors in fields where any career is highly unlikely, that is a scam.  The least the administration could do—short of cutting the fat out of a bloated budget—is to tell the kids the odds of the slot machine paying off.

If we think colleges are overly expensive—and they certainly are—just wait until they are free.

Oh, what do I know?  I’m just a “non-traditional” student wandering the campus taking classes for the fun of it.