It has been raining, something not all that common here in New Mexico. Two of my classes are at opposite ends of the campus, so I decided to wear a raincoat. Wearing a raincoat in southern New Mexico is really rare. When I put it on, something rustled in the pocket and I found $7.00 and a receipt from a bookstore. The receipt was dated 5 years ago.

Raincoat, rain, I guess this is what got me thinking of England lately. Since I wrote something very nice about England a few weeks ago, I’m hoping I can get away with a little criticism this week. Besides, most of my hate mail lately has been coming from South Carolina or India; I’m ready for a change.

If New Mexico has the best weather, England is way at the other end of the spectrum, somewhere near Minnesota in winter, except you can freeze in England in July. At best they have 2 months of late spring followed by 10 months of dank, wet, gloomy hell. I remember listening to the BBC while cruising on a canal boat through Oxford one day in July. The announcer said, “We have music for your English summer. All thirty minutes of it.”

It mystifies me how a people that at one time or another conquered half the planet, including some very nice warm places, never moved. Look at Australia! If you have to live on an island, why not pick the warm one with great beaches? No! Only the English would ship their convicts to the warm island while staying in a place as cold as boarding house soup.

Personally, my idea of paradise involves a hot beach. And it doesn’t matter how you spell that word. Here in New Mexico, we have great beaches. The beaches just don’t have any water.

Having at one point been masters of North America, the British were only able to hang onto Canada. I guess it had exactly what England loves, lots of cold, wet land. All this is important, for only after you understand that the English are a beautiful people who prefer misery to comfort can you begin to understand English cooking.

I’m not sure, but I think the national dish of England is pork tartar. This is a country that specializes in gray, greasy, and boiled food. I think I remember the boiled part the most, vegetables boiled to a uniform gray. Nowhere else in the world do people brag about mushy peas. And if you see a sign saying a restaurant has a choice of three vegetables, this means you can choose between carrots, peas, and succotash. 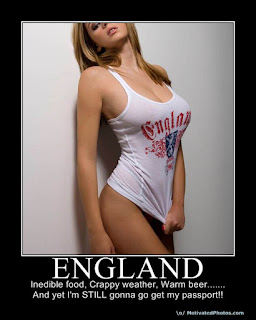 To be fair, maybe it is just because the food is different.  Sometimes different is good.  Pork and beans and baked tomatos for breakfast is different, but good?  They actually sell something called "Breakfast In A Can."  Sausage, bean, and tomatoes all in one can.  This is different, but argualbly not good.

Coming from the Southwest, I prefer my food to be on the spicy side; if food doesn’t bite back, it’s not hot enough. Despite what my wife claims, this does not mean I prefer my food to actually be on fire as I eat it, but clearly, if your eyes are not tearing uncontrollably you probably prefer food that comes out of a small jar with “Gerbers” printed on the label. So you can imagine my difficulties in England. I remember a restaurant in London where I sent a waiter on a quest to find me the hottest spice in the kitchen. After a long wait, he brought me a jar of yellow mustard. I ate it with a spoon.

I don’t know why I expected anything different; every restaurant has two strange condiment bottles on the table; white sauce and brown sauce. As far as I could tell, they were two different colors of library paste.

The good news is that there are a number of good restaurants in England; you just have to know the secret to finding them; only eat at restaurants that feature food from countries that England conquered. The Thai and Indian restaurants are spectacular.  And I really loved the jars of pickled cockels, each came with a little wooden spoon.  And I tried a jellied eel; and it tastes pretty much like what you think it does, only colder, greasier, and eelier.

I think I’ve figured it out; I now understand almost everything about the English. Except cricket.
Posted by Mark Milliorn at 12:01 AM