Many years ago, there was a beautiful and fertile valley. A hunter, intrigued by the abundant game, made his home in the valley and began to hunt rabbits. There was always meat on the table, life was easy and the hunter was happy.

Before long, a farmer moved to the valley and began to grow onions. He worked very hard and soon his efforts paid off with a bumper crop. Within a very short time he began to regularly trade onions with his neighbor for rabbit meat. Both men were very happy since rabbit stew tastes ever so much better with onions.

By the end of the first year, a shoemaker moved to the valley. Trading with the hunter for rabbit skins and meat, and with the farmer for onions he was soon making shoes for the families of both happy men.

The valley grew even happier with the arrival of a master brewer. Rabbit stew tastes great, but if you can wash it down with a cold beer it becomes a feast fit for a king. Shoes, meat, onions, and beer; the valley now had a thriving economy and a rosy future.


The next pilgrim was a preacher. The wives of the hunter, the farmer, the shoemaker, and the brewer insisted that their families must join the new church, if for no other reason than for the benefit of the children. The preacher explained that only through prayer and the devout religious observations would the harvest of onions and the availability of rabbits be assured. For his guidance, he accepted the gifts of shoes, meat, and onions. You can also be sure he accepted the beer, since he was the only preacher. Any preacher will drink beer as long as there isn’t another preacher to watch him do it.

By now, the little community was growing larger. Luckily a politician moved to the valley and explained the need for government and was quickly elected mayor. The new mayor quickly established an orderly society, with rules, laws, and taxes. Understanding the taxes was difficult, but the arrival of both a lawyer and an accountant helped solve the problem.

Before long, for the safety of the children, the community passed a law that every home had to have a fence built around it. This didn’t make the hunter very happy, as the fence was to be made from trees that primarily grew where the rabbits lived, but the hunter agreed to the project for the sake of the children. The work was very hard, but luckily the accountant counted the boards while the lawyer pointed out where the fences should be built. The hunter, the farmer, the shoemaker, and the brewer took time off from their jobs and with the spiritual guidance of the preacher, soon had the fences built.

The children were safe but uneducated, so the mayor wrote a letter and enticed a school teacher to move to the valley. It turned out the little community was ignorant, she explained that she was an educator and would instill a paradigm of advanced educational pedagogy based on excellence and self esteem. The ignorant people of the community were thrilled and hoped if this worked, maybe someday the educator could also teach the children. They understood this wouldn’t be anytime soon as the mayor was promising a football team just as soon as a coach could be found.

Schools are expensive, and there was a shortage of rabbit meat and onions, even though the mayor had passed a law against falling production. The mayor, the lawyer, and the accountant had worked out a five year economic plan that guaranteed success; the hunter was required by law to only shoot very large rabbits, the farmer was to double his yield per acre, and the brewer was required to put pints of beer in half pint bottles.

It was at this point that a man moved to the town. While he had a very large family, he didn’t have a profession. It seems that he did nothing at all. While it was the opinion of at least the farmer and the brewer that this man should starve to death, the preacher and the lawyer were good people and managed to explain that this man’s family had a right to eat, was entitled to eat, and the community owed it to them to feed them and provide shoes. 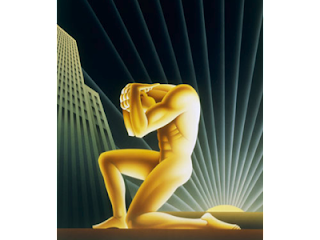 Since there was still a shortage, the mayor introduced a new sin tax on beer. Shortly after this new tax, the community discovered that the brewer had left town in the middle of the night with the preacher’s wife, neither was ever seen again. For some reason, right about the same time, the preacher convinced the mayor that alcohol was evil and new laws were passed making the drinking of beer against the law.

The farmer simply quit. He packed up his bags and moved out. He said several unkind things as he left, but there was no convincing him to stay. The mayor didn’t even try, saying he couldn’t be responsible for every undercapitalized business in town. Still the town must do something to preserve their way of life, so they passed a law forbidding the hunter from moving. Most of the pressure for this new law came from the shoemaker who was worried about the availability of rabbit skins.

The community’s fears proved to be well founded, for within a month they caught the hunter trying to sneak out of town. There was a trial, and eventually the lawyer convinced the community that a lesson had to be set for the education of everyone, especially the children. The hunter was hanged.

Years later when someone visited the valley, there were no people living there. The farmer’s fields were a dusty ruin and all the houses had blown down. Even the rabbits were gone, since without the hunter, they had quickly overpopulated, stripped the valley of plant life, and were already on the verge of starvation when an epidemic of Tularemia made them extinct.

The only thing left to show that people had ever lived in the valley was a faded sign where the mayor’s house had once been. As it swings in the wind, you can still dimly read the faded words; Welcome To New Mexico.