A Ship By Any Other Name

I was thinking about the habit of reusing ships' names, particularly the names of ships that have distinguished service records.  There are—and probably always will be—a USS Enterprise, a USS Wasp, and a USS Hornet.

These are the names of ships that have distinguished themselves repeatedly throughout American naval history, and the Navy keeps their traditions and history alive by giving the names of older ships with a proud history to new ships.

Tradition is very important to the Navy, and probably the best example of this would be the thirteen buttons on the fly of the wool pants the sailors wear.  Recruits tell each other that the buttons represent the original thirteen colonies—a beautiful story that everyone knows is true but which, unfortunately, is not based on fact.  Navy pants used to have both five and nine buttons, but switched to thirteen when the pants were redesigned and the fly enlarged.  (And most savvy sailors have had their uniforms tailored to use more convenient Velcro—the buttons are just for show.)

Some ship names get used frequently:  There have been ten ships named after George Washington and five different destroyers named after Civil War hero Admiral Farragut (this latter use despite the fact that destroyers weren’t developed until well after the admiral’s death).

If you understand how the Navy solicits budget increases from Congress, you won’t be surprised to learn that every state in the union has had a battleship, a cruiser, or at least a submarine named after it.  Every city large enough to have a congressional district within the city lines has furnished a ship name.  There have been seven ships named after Boston and six named after Philadelphia.

The opposite is also true—if a tragic disaster occurs on a ship, it is unlikely to see its name issued to a new ship.  Through no fault of the captain or crew, the USS Pueblo was seized by North Korea over fifty years ago, and it is unlikely the Navy will launch a new ship with that name.  Nor is there likely to be a new USS Thresher or a new USS William D. Porter.  (If you are not familiar with that last unlucky ship, follow this link.)

Cruise lines are unlikely to ever launch a new Andrea Doria or a new Lusitania.  The Italians are also very unlikely to name a ship after the Costa Concordia.  And while there are a couple of companies proposing to launch a new version of the Titanic, I wouldn’t rush out to buy tickets. Even the Exxon Valdez was renamed, very quietly—six times before she was finally scrapped. 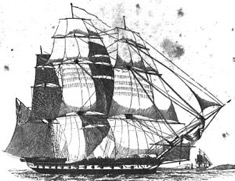 There is one ship name however, that seems to be jinxed.  Unfortunately, it is the USS United States.  The first such ship was one of the first six frigates built by the United States, along with the Old Ironsides, the USS Constitution.  In her early days, she had a glorious career in several wars, fighting twice against England, the Barbary Pirates, and Mexico.  In her old age however, she was something of a wreck, rotting at the pier at Norfolk, Virginia.  When the Civil War started, the Union Navy set fire to her, allowing her to sink at the pier.

The Confederates needed ships, so they pumped her out, repaired her and relaunched her with the somewhat improbable name of CSS United States.  Finally, the Confederates decided to sink the vessel to bottle up the Elizabeth River.  After she was sailed into position, the Confederate soldiers ruined a crate of axes trying to batter through the tough live oak timber that made up her hull.  Finally, they bored through the wood, allowing her to sink.  The Union raised her again, but unfortunately, this time the ship was broken up for the valuable timber.

Just as the ship was being broken up, a civilian steam brigantine (this means she had both sail and a steam-powered screw) was launched.  The SS United States was a three-decked cargo ship, incredibly expensive, and relatively fast.  Unfortunately, she ran around on Cape Romain and was a total loss.  Her wreckage has just recently been located.

The second USS United States was a battle cruiser, a type of ship that was neither fish nor fowl at a time when the technology and designs of ships were changing rapidly.  Though the hull was laid down during World War I, the priorities of the Navy switched during the war and construction was begun and halted repeatedly.  When the war was over, construction began again, only to be cancelled by the Washington Naval Treaty of 1922.  When the project was cancelled, the ship was only 12% completed.

The name was retired for a while, but during the Second World War, we launched enough ships that we literally ran out of suitable names.  (Want to win at trivia?  Here is a killer question that even my retired navy friends can’t answer.  I just checked, and even Google has never heard of this.  What were the "88 Sams"?  They were the 88 Liberty ships we gave England during the war, all of which had ‘Sam’ in their names.)

It is possible that the Navy deliberately did not name a ship the "USS United States" in order to avoid the inevitable hit to morale that would occur if the ship were sunk.  So many ships were lost that the loss of any given ship was a very real possibility.

After the war, however, the US Navy was in a new desperate fight—this time with the US Air Force.  The Air Force thought the Navy was superfluous in a nuclear age, since all new wars would be fought with bombers.  Desperate to keep up, the Navy came up with the idea of a super-aircraft carrier:  a huge monster that could handle jet aircraft and twin-engine jet bombers.  And the name, of course, would be the USS United States (or as the Navy designated her, CVA-58).  Money was appropriated, blueprints were drawn and construction was begun. 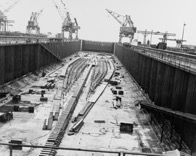 Then, in 1949, President Harry Truman pulled the plug on the project just after the keel was laid.  The photo at right is all of the ship that was ever completed.

The SS United States was launched next, which was the largest and fastest liner built in the US.  The ship was almost as large as the aircraft carrier above and it still holds the Blue Ribbon for the fastest crossing of the Atlantic, in both directions.  The ship was designed to be converted into either a troopship or a hospital ship in case of war (changing her name to the USS United States).  Unfortunately, she has proven far too expensive to be operated profitably, and for the last 50 years she has been tied to a dock, slowly rusting away while various investors try to figure out what to do with such a behemoth.

Meanwhile, the Navy finally decided on a new nuclear-powered aircraft carrier that would finally be named the USS United States.  The keel was laid down in 1993, construction proceeded smoothly, the ship was actually launched and is still in service.  However, in February 1995, the Secretary of the Navy renamed the new vessel the USS Harry Truman.

From the above, we can piece together a couple of useful facts:  First, there are probably any number of luckier names for a ship.  Second, Harry Truman killed the USS United States... Twice!