Everyone is writing about the college recruitment scandals, so I was going to ignore it.  But, when the news broke that one of the brainless twits who had to buy her way into a state college learned that she had been publicly outed (and her equally brain-dead mother arrested) while spending her spring break aboard a yacht owned by one of the administrators of her crooked university—well, I couldn’t resist joining the angry crowd.

What?  How can that be?  We constantly hear that education needs more money.  Universities are always broke.  Taxpayers realizing this, routinely vote for school bond issues.  So, universities aren’t really rich, they are poor.  Right?

Nope.  While no entity slurping up cash from the public trough will ever admit it has an ample budget, the truth is that universities have access to massive piles of cash.  The problem is how they choose to spend it.  Some universities are even super rich.  Harvard is squatting on an endowment that is bigger than the GDP of half the countries in the world.  (Literally.  Using data from the United Nations for comparison, Harvard’s endowment is larger than the GDP of 108 out of 192 member countries.)

Where most universities are actually nothing more than poor football teams with small colleges attached like leeches, Harvard is a hedge fund that owns a few classrooms.

Even my own beloved Enema U has a budget of…well, I’m not sure how much it is.  New Mexico spends a hell of a lot per college student:  about $9,300 per student each year, which is the ninth highest amount in the nation.  (Yes, New Mexico spends more per college student than California, New York, or Massachusetts.  This is why Enema U is frequently referred to as "Oxford on the Rio Grande".)

To the money the state throws in, you can add tuition, lab fees, and student activity fees.  Then you can also toss in all the revenue from athletics, the T-shirt shop (formerly referred to as a book store), cafeteria, housing, parking fees, vending machines and all the other miscellaneous ways the university separates money from its students like a dockside hooker fleecing sailors.  At Enema U, this is an additional approximately $40 million a year.

The total budget is supposedly about $621 million, but that number does not include revenue from the Foundation, Enema U’s very own little mini-endowment.  While the foundation received over $20 million in donations last year, the income from the invested assets is a little hazy.  (Actually, the Foundation's finances are so closely guarded that we know more about Trump's tax returns, by comparison). So, let's call this another $10-15 million, conservatively. Of course, how this money is spent is no more transparent than its other accounting. 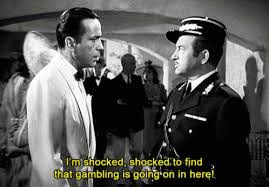 Worse, exactly who is giving money to the foundations is also secret.  The two largest universities in the state received donations of over $50 million last year.  These same two universities awarded millions in contracts for goods and services. Are contracts awarded in exchange for "invisible" Foundation donations?  Is there any connection between coaches' publicly supporting various business ventures in exchange for those donations? Is there gambling going on in the back room of Rick’s Cafe? If so, I’m shocked, shocked!

While the university is owned by the state, and as such, is subject to various state public scrutiny laws, the non-profit foundation is a separate entity and thus, is exempt from those laws.  At least, that is how the state Supreme Court has ruled.  (Which is why Supreme Court judges should NOT be elected.)

In the last couple of decades, the presidents of both universities and their various coaches have received bonuses from the foundations that were anonymously donated.  Did the donors receive any special consideration for their contributions?  Again, no one knows...nor can inquiring minds find out.

The wealth of the universities extends to more than just their bank accounts.  They own vast amounts of real property; student housing, farm lands, cafeterias, and various real holdings.  Whether or not a university decides to build a new dormitory—which would be immune to property tax—would have a huge effect on the real estate market around a university.

Do donations shape influence at public universities?  Well, there is a simple test:  Obtain a list of the regents.  Then do a Google search of their names and the name of the university.  If you find newspaper stories about large contributions from an individual before they became a regent, you have your answer.

Here is another test:  Look up the last couple of bond issues for your university.  That bond proposal to expand a classroom building—did it really result in more classrooms, or did they tear down the old building and build a new multi-use building (educational code for more administrative offices)?  Was there a bond issue passed to provide a new building because of a dramatic increase in the number of students in the major that would use that building?  If so, double check their math.  How many students majoring in that field did they really have?  How many do they have now?

Library bonds nearly always pass, since the voters naively believe that access to books automatically means better education.  But, did the increase in funds really result in a corresponding increase in the library’s collection?  Compared to a decade ago, are there more or fewer journal subscriptions?  Don’t ask the librarians, ask a couple of professors who use the library.

The cost of education has grown dramatically.  The Doc and I both went to public universities and we both went to graduate schools.   While the tuition at her medical school was fairly expensive (and we were as poor as church mice), we both managed to graduate without incurring any debt.  Today, that scenario is impossible:  college education has grown to be far too costly.  As costs grew, universities had access to a constantly expanding pool of money, and predictably the size of those funds tempted some people to use the money for their own good.

Costs can be cut at universities.  Any businessman could sit down with a copy of the university budget and easily pare away millions of dollars.  Does the golf team really need a new bus made by Mercedes Benz?  Do we really need expensive programs that annually produce more graduates than there are people employed in that field within the entire state?  Does a university really need thirty or forty times as many administrators than they had two decades ago?

If no effort is made to reduce the incredible amounts of money at universities, then we should not be surprised to discover cases where that money corrupts the institution and the individuals who inhabit it.
Posted by Mark Milliorn at 12:01 AM